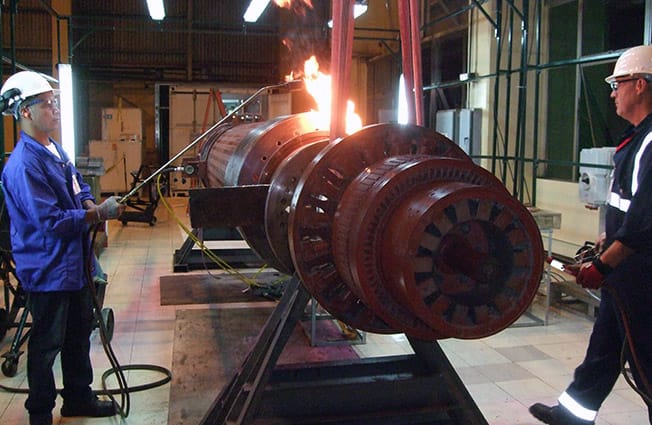 Tongonan Geothermal Power Plant is situated in Kananga, Leyte in the Philippines. The Power Plant generates and supplies electricity in Leyte and also exports power to Cebu through the Leyte-Cebu interconnection project.

Quartzelec were awarded the contract to recondition and rewind the generator rotor of Unit 3 with the aim to restore the reliability and efficiency of the rotor. The rotor was inspected in 2010 and a number of problems were identified including loose and cracked end winding blocking, heavy dusting, contamination, possible insulation degradation and shorted turns on STIIT tests and drop tests.

The generator is 2 pole, 3PH, 60HZ air cooled with a brushless exciter, 13,800V and 3600RPM. On site, the generator was disassembled and the rotor was removed. Initial inspections and testing was conducted on the rotor which included winding and insulation resistance tests and a general overhaul visual inspection. The rotor was dismantled by removing the diodes and fuses, fans and retaining rings. Existing rotor coils were removed and the end winding was inspected. Further tests and inspections took place after the rotor disassembly including non destructive examination, testing of diodes and fuses, the collector ring and lead insulation and the rotating excitation system.

The new insulation including rotor coils was designed and manufactured by our team of experienced and qualified engineers in the Rugby workshop and were suitably packed and shipped to site.

The rotor was prepared for winding and the new coils were prepared for installation. Each coil was wound into the slots and the coils were pre-insulated and epoxy coated Nomex strips were applied during the fitting of turns. The rotor was reassembled by installing the top wedges using top filters of polyester glass laminate, installing permanent end turn blocking, applying retaining ring insulation, the retaining rings, refitting the cooling fans and installing new fuses. Once assembled, electrical and mechanical tests and visual inspections were conducted on the rotor and also on the exciter. Tests were also carried out on the stator including insulation and winding resistance tests, polarization index measurements, wedge tightness tests and El-CID core tests.

During the stator inspection, evidence of fretting and Partial Discharge was discovered and repairs were completed during the outage. The work was successfully completed and a resonance test was conducted so that possible movement could be trended by repeating the test at a future date.