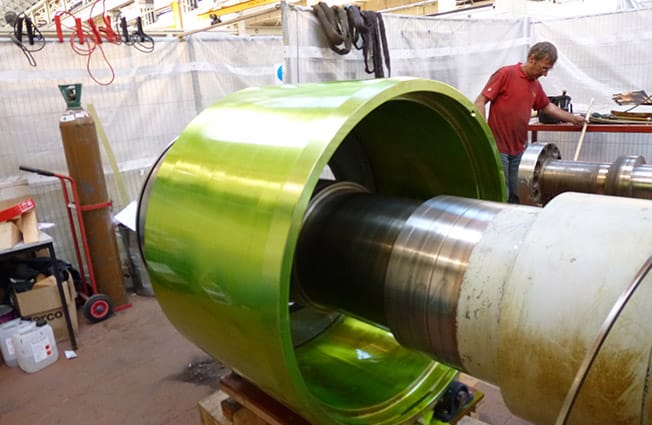 The Esso refinery at Fawley, near Southampton is the largest in the UK and one of the most complex in Europe. Situated on Southampton Water, it has a mile-long marine terminal that handles around 22 million tonnes of crude oil and other products every year. The refinery processes around 330,000 barrels of crude oil a day and provides 20 per cent of UK refinery capacity.

Site emissions have been reduced partly by the acquisition of a £60 million Cogen unit. This highly energy efficient combined heat and power unit burns fuel at an efficiency of 75 per cent, twice the efficiency of a conventional power station and Quartzelec were awarded the contract to carry out the first major overhaul of the Cogen Generator since its’ change of ownership.

The overhaul of the 2 pole GEC-ALSTHOM Generator, rated at 172.625 MVA, 15,000 V, 6,644 A, took place across 2 sites. The inspection and testing of the generator in-situ with the rotor shipped back to the Quartzelec Rugby workshop where a controlled environment could be maintained and suitable recourses were readily available.

This was the first time that Esso Fawley had managed a major refurbishment of the Cogen Plant and Quartzelec were required to follow a tight programme. Work commenced by conducting a mechanical strip down of the generator which included removal of fan blades, rotor and exciter. At Rugby the retaining rings were removed, pole-to-pole connections replaced and electrical tests including IR, PI and recurrent surge oscilloscope test were conducted. The rotor was dynamically balanced before transportation back to site.

On site, various tests and inspections were carried out on the stator including a wedge tightness check and El-Cid core tests. Bearings were replaced and the exciter also overhauled.

Due to the wind and rain, crane lifts were not permitted and this delayed the rotor from being removed / replaced. However, despite these unfavourable conditions, Quartzelec succeeded in meeting the tight deadline and exceeded client expectations.