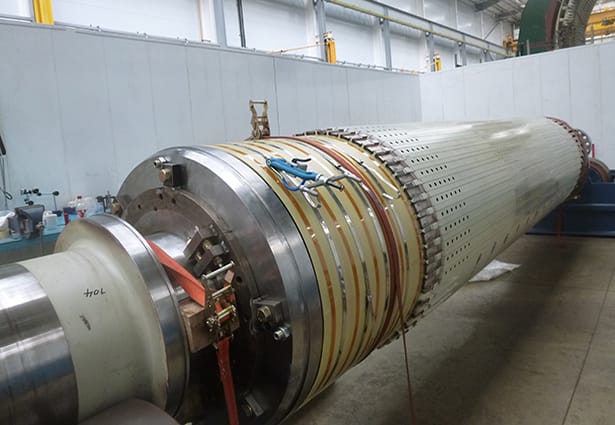 The PGE Group is the largest energy provider in Poland encompassing activities from fuel mining, generation, power transmission and end customer sales. The generation portfolio consists of over 40 power stations including the largest thermal power plant in Europe.

Quartzelec successfully tendered for the major overhaul of the WY21Z 120 MVA 2 pole generator at the Rzeszow CHP Power Station.

Initial site works were completed by Quartzelec to remove the generator enclosure, complete mechanical and electrical disconnection, skidding of the complete generator from between the steam and gas turbines followed by dismantling of the generator to enable the Rotor to be shipped back to the Quartzelec workshop in Rugby, UK.

In order to confirm the electrical integrity of the stator winding, several electrical tests were conducted on site including Insulation Resistance, Polarisation Index, High Voltage, Winding Resistance, Tan Delta, Capacitance and Partial Discharge. To identify any potential damage to the core laminations an EL-CID test was performed with a robotic inspection to identify any loose stator wedges. Furthermore, visual and boroscope inspections were performed, revealing foreign material within the ventilation ducts which were then removed. Coolers, bearings, brush holders and RTDs were all revalidated and confirmed as acceptable to be returned to service.

The rotor was delivered to the Rugby Workshop to remove both retaining rings and carry out a detailed inspection. The rotor was found to have collapsed top turns and a damaged overhang shim. Remedial actions were completed including replacement of the retaining ring insulation to new mechanically stronger material, cleaning of the radial stalks and skimming of the slip rings. The rotor body was cleaned and revalidated by means of Non Destructive Testing. The rotor was electrically tested including IR, PI, RSO and Winding Resistance and the completed rotor was then mechanically proved using high-speed balance and overspeed testing.

Quartzelec returned the generator to service with complete responsibility for full system alignment including the generator, clutch, gearbox steam turbine and gas turbine. Once the mechanical generator installation was complete, Quartzelec rebuilt the acoustic enclosure, remade all of the electrical connections and commenced the pre-commissioning checks.